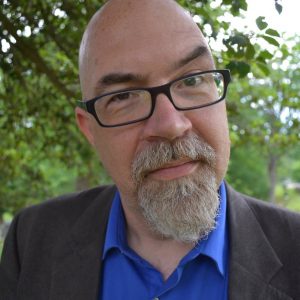 I met Jamie Ridenhour through a mutual friend in North Carolina who was promoting Jamie’s son’s Kickstarter for his CD (both of whom I hope to have on the podcast soon as well!), and just knew I wanted to chat with him about all of his stuff.  And a lot of stuff he has.  He’s a poet, author, playwright, podcaster, college professor, creator of short films, and a rock star guitar player.

Jamie is the creator of the amazing new podcast, Palimpsest, available anywhere you listen to podcasts.  Hayley Heninger, the Voice of Jamie’s imagination, i.e., the star of Palimpsest, almost joined Jamie on this episode, but she opted for vacation to the Grand Canyon instead.  She was missed.  I probably would have made the same decision.

We chat about a lot of his work in this episode, and so I want to create a helpful resource for you to follow along.  Feel free to read/listen/watch as much or as little as you want before the episode, or read/watch/listen to them in real time!  Just pause the episode, r/w/l, then unpause!  That would definitely be an experience.

In any case, here are the pieces referenced, in order of appearance!  They can all be found at Jamie’s Website, also, plus so much more!

Hinges
Captain Cleveland Grackle’s Galactic Cabaret vs the Goblins of Vishnu Six
Singing by the Fire
The Case of the Discounted Death (costs about $3.75 (US dollars) for the magazine issue)
Barking Mad (IF YOU FIND ONE, SEND IT TO ME!)
How Jordy Went

Also! Amazing Short Films created by Jamie based on his poems!
The Cornerboys
House of the Yaga

You’re welcome in advance for the great new reads (and listens, and views)!   Subscribe wherever you listen to your podcasts, and jump on iTunes and review the show, wouldja? Thanks for listening!

Flies in the Kitchen

send dan a note
connect with me